How to Make Smart Smoothies

Smoothies are my all-time favorite way to pack tons of nutrition into one meal. Think about it– how likely are you to sit down with a fork and eat a breakfast of kale, carrots, blueberries and peanut butter and then wash it down with a glass of milk? That’s what I thought! If you’re like most human beings walking the planet, you are crazy-busy and barely have time to squeeze in a shower before running out of the house in the morning. Imagine blending nutritious and delicious foods together and drinking them on your way to work! That’s what I call the best of both worlds– nutrition and convenience wrapped up into one! Here are some of the most frequently asked questions I receive about the best ingredients for a healthy smoothie:

What to drink (besides water) to meet water needs

Plain old fashioned water is your absolute best bet for meeting your fluid requirements. But trust me…I understand that water can get a little boring and sometimes you need to change it up a bit. To give it a little kick, I always recommend adding a splash of 100% fruit juice, a twist of lemon, lime or orange, or cucumber slices.

Water comes in many forms however, and most count toward your daily fluid requirements.  They aren’t all created equal, though.  Consider these beverages:

Gatorade and other sports drinks: Gatorade was created as a beverage to help the Florida Gators football team perform better during practice and games. As they sweat, they lost important electrolytes responsible for the body’s chemical balance (specifically sodium, potassium and chloride). As a result, they weren’t playing as well as they could have been.Scientists formulated a beverage to replenish these electrolytes, and Gatorade was born. It was created for athletes, but today it’s consumed by athletes and non-athletes alike. The problem is, if you’re drinking Gatorade to meet your fluid needs but aren’t participating in prolonged physical activity and sweating a lot, you’ll be taking in a bunch of extra calories that you probably won’t burn off. In this case, water is the better choice for you.

A 32-ounce bottle of Gatorade has 200 calories, 440 mg of sodium and 56 grams of sugar. If you drink two bottles of Gatorade every day, that’s 400 extra calories and 880 milligrams of sodium per day.

Again, Gatorade is a perfectly suitable choice if you’re participating in vigorous physical activity, but not when you’re sitting at your desk for hours on end. Better yet, for a more natural electrolyte replacement, try coconut water!

Coffee, tea and other caffeinated beverages: Although once thought to dehydrate your body, scientists have determined that there’s no truth behind the caffeine-dehydration argument as long as you drink it in moderation. Drinking a cup of coffee in the morning to get you going counts, but don’t forget to count the extra calories from the cream and sugar. For example, a grande Caffé Mocha with whipped cream from Starbucks has a whopping 330 calories, 15 grams of fat, 9 grams of saturated fat and 35 grams of sugar!

Soft drinks and diet soft drinks: Yes, they both count toward your fluid needs, but you want to go easy on them. Just like sports drinks and sweetened coffee drinks, regular soft drinks pack a sugary, calorie-loaded punch. Sugary beverages also cause the crash-and-burn effect. They give you immediate energy in the form of simple carbohydrates, which means you digest them rapidly and then crash and burn. Diet soft drinks contain artificial sweeteners and can actually make you crave sugar because they’re so much sweeter than regular table sugar.

Alcohol: Beer, wine and hard liquor dehydrate your body and don’t count (sorry!) toward your water needs.  Actually, they have the opposite effect. Alcohol triggers your kidneys to produce more urine. The more you urinate, the more dehydrated you become.

Vitamin water can be a nice change of pace from regular water once in a while but should never replace pure water. They can get pretty expensive, too!  Drinking one bottle of vitamin-enhanced water a day will add up to over $400 by the end of the year! 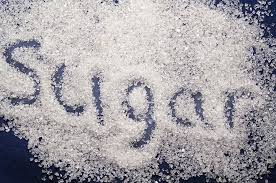 Sugar, sugar everywhere! See just how much is in your favorite foods, along with healthier alternatives!

Do you every grow tired of drinking plain old water? It’s o.k. if you said yes…I do too! Instead of reaching for a calorie-rich beverage like juice, soda, energy drinks or Gatorade or calorie-free flavored waters made with artificial sweetener (which most are by the way), make your own fruit-infused water! It’s refreshing, zero calories (unless you eat the fruit at the bottom) and adds a touch of natural flavor.

Here’s what to do:

Just in time for summer…

Place water in pitcher and add pineapple and mint leaves. Refrigerate for at least two hours. Pour over ice and enjoy!

or green. If it’s followed by the word ‘tea’…drink up!

How about iced tea?

Iced tea offers the same benefits as long as it starts out hot and then is cooled down. Oh, and store bought powdered mixtures don’t count!

Should you drink it? Low Sodium V-8 Juice

For a perfect salty/sweet snack, try pairing a can of Low Sodium V8 Juice with a cluster of grapes.  Now you can check off one serving of vegetables and one serving of fruit for the day.

Forget snacking on Doritos and Pepsi, that combination won’t get you very far.  When you need an extra boost of energy, think fruits and vegetables…they will never let you down!

Should you drink it? Starbucks Grande Caffe Mocha

Only if you want to overdose on sugar and saturated fat!  Let’s get one thing straight…sugar and fat are not the enemy, unless of course you’re talking about one 16 oz grande Caffe Mocha offering over 8 teaspoons of sugar and 53% saturated fat!  Sure it supplies caffeine to give you a boost, but the excessive sugar and saturated fat content is sure to put you in a slump shortly after.  I’ll bet this wasn’t your intention when you ordered this frothy beverage in the first place.

Check this out:  It only takes 11 Caffe Mocha’s to gain 1 pound of body fat!  This is assuming you aren’t subtracting 330 calories from your diet to compensate for the mocha.  Most of us don’t!  We think of the mocha as “just a beverage” when in fact it is a “meal”, just not a very nutritious one.

Here are the nutrition facts for a grande Caffe Mocha made with 2% milk:

A better option would be a grande Caffe Latte made with skim milk:

I know what you’re thinking:  “But it doesn’t taste as good Melanie!”  Trust me, once your taste buds get used to not having all of that extra sugar on them, they will adapt to prefer less sugar.  Then, when you eventually indulge in a Caffe Mocha you will feel like you are drinking a cup of cotton candy!